Tuesday Night for many means one thing, Night Riding, and the same goes for the Mtb crew in the Velo Store.

Last night was special one for one particular customer, Bos (pictured below) who hours before had bought the Whyte G150. It was only the second one in any store in Great Britain and he was certainly the first member of the General Public to own one. 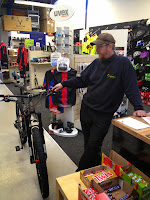 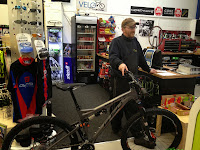 And so it was to the night ride which as always kept to the strict 6.00pm departure and left at about 10 past (mostly my fault). It was a tad damp as we picked up Jonathan Turner on the White Bridge were a quick grunt and nod of the head were exchanged before we proceeded to weave our way up-to Hanchurch woods. Mr Turner nearly took honours on Beech cave climb but was pipped by Skinny Si Williams. The slightly more Robust Dave Johnson and Me (MR J) were third and forth respectively.

Loop's were completed with extra climbs thrown in and descents were had mostly completed using the slide and fall technique.

It was then that hip flasks were extracted and chit chat started. Highland Park & Laphoriag were voted best  on show. Reluctantly flasks were put away and The Barlaston  motorway was eventually hit via some brambly detours and one sore lip. Legs span and battles were fought, Simon tried to push Jon in the canal,  and a few PBs were grabbed.

Eventually it was back to the shop, bikes packed, files collected and then home. For me it was shower, pasta bake and Tea, for others there may have been a night cap.

It grim up North but are you more likely to keep your bike ?

The Velo store has its very own internet battle taking place on Amazon,

The last week have the  two top sellers on our amazon pages  telling a story ?

So are the streets of London cleaner or is everyone on single speeds ? And is the whole of the northern part of Britain sleeping with their bikes ? 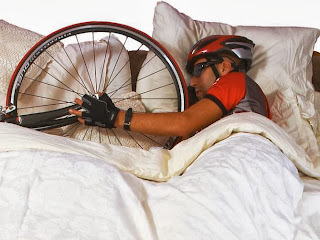 So Ive been deliberating buying myself a new bike to thrash around the peak and round the Churnet.

Think I might of found it on our own website. T129s and as its in stock if Im nice to Simon I could be riding it round wales next week or our own spooky woods tomorrow.

What do reckon Si ?

CTL are giving away rear lights

Any one books on to and subsequently attends on either are level 2 or level 3 course at Dimensions in the October half term will get a free Electron Pico 4 rear light worth £9.99.

Borris bans Lorries for London. DO we think Stoke or Stafford will follow suit ?

Lorries – a frequent cause of serious and fatal injuries to commuter cyclists – could become scarcer in the London rush hour under plans to trial more early morning and night time deliveries.
Transport for London (TfL) will use the successful precedent of a similar scheme in force during the London 2012 Olympic Games.

The new plans were published in a document, Delivering a Road Freight Legacy, released earlier this month. The document received a cautious welcome from the Freight Transport Association, who said: "the logistics industry is ready to respond to these new conditions". It added, however, that the haulage industry will face "significant challenges" adapting to the TfL's proposals.
The arrival of the out-of-hours pilot scheme fills a major gap in a series of measures announced by London Mayor Boris Johnson six weeks ago. In early September he outlined a number of plans including a proposal that could see lorries not fitted with basic safety equipment hit with a fine up to £200 if they enter the city centre.
A group has been set up to establish how the out of hours scheme could operate in practice and examine whether legislation and vehicles will need to be modified to ensure its successful implementation.
The out-of-hours trials will begin early in 2014 and further details of how the programme will work will be announced later this year.
Posted by Unknown at 13:05 No comments:

Spent a few hours yesterday adding some polaris gloves  and bags to amazon so we can make room for new stock arrivals over the coming weeks. first in are the new range of Lezyne lights and then hopefuuly it's  the North wave winter boots range and clothes.
Posted by Unknown at 03:17 No comments:

Published: 10 October 2013
Report: Greater Manchester Police
Cyclists are being asked by police to take care when using GPS mapping mobile apps. Offenders have been using mobile apps such as Strava, Endomondo and Map My Ride which track the movements of cyclists from their home.

The apps enable cyclists to track their ride and compete against other cyclists but can also be used by offenders to work out where high value bikes are being stored.
However, by making a few amends to the settings, cyclists can protect themselves and their bikes.
Sergeant Chris Evans from Stockport West Neighbourhood Policing Team, said: “We appreciate the benefits that these types of apps have but would urge to amend the privacy settings before setting off for their journey to protect themselves from becoming a victim of crime.
“Riders can amend the settings of these apps to ensure that their starting and finishing locations can't be seen by other people.
"Additionally, cyclists can avoid theft by reviewing the security of their sheds or garages and ensuring they use a D-lock to secure their bike to something immovable such as ladders."

We've got some  great deals on locks from Kyptonite.
Posted by Unknown at 02:54 No comments:

No Tom and Simon in Store which means Im in Charge of my store for change. Wander what I can get up to.

New tyre time for starters.
Posted by Unknown at 07:01 No comments:

Last of the Summer Rides


Last of the Summer Rides,
With Northerly winds forecast to bring in the first of this Autumn's cold weather later this week meaning from here in it's probably time to don the winter jackets and boots as well as under helmets buffs and eventually wind proof skull caps.  Last night was single layer shorts and chat time as the Velo Tuesday night ride headed up to Hanchurch woods via canal towpaths, across golf courses and through the fishing pools.  Early casualties were Jon Sparkes (Tyre issues) and a few non starters (who had early starts the next day) Before getting to Hanchurch though it was a quick push through Down Banks were Graham moved to Strava third (on a single speed !!) on the Knaim & No. climb and then through spooky woods  were Simon Williams got 4th on Clay canyon and Dave Johnson moved to 4th on Spooky Woods Wolf run.

By the time we hit road (and met Piley) on the Woods exit the hope 4‘s were on  and the pace picked up for the Tarmac run up to and past Poachers cottage, and a pleasant Spin through the Golf Course.

Charles who was riding his slightly over specked Orange Patriot really enjoyed the Fishing pool and The Rooty Climb climbs and would of course have smiled more if he hadn't got a few broken ribs. This was evident in that he only picked up one 2nd place on Strava and no KOM’s, well down on his normal five or six.

Dark was up, trails were lost and found and before we knew it were heading back down through Beech caves were Paul, on only his third ride, showed us he wasn't backing down from anything. And so back to Alternate M6 and spin back to the shop for bike loading and, in my and Graham's case, a quick check on tomorrows work.

And so to next Tuesday where I'm predicting more layers, more dark, possibly more wet, but definitely more smiles.

* The Velo Store ride every Saturday From 9.00 (road inclusive pace) Every Tuesday 18.00 Mountain (social but usually over 20 miles) last Sunday every month Cafe Run (60+ miles 17 MPH average) If you fancy trying one of our rides, all three are free - just turn up with a suitable bike and kit.
Posted by Unknown at 06:35 No comments:

Back in the Press, 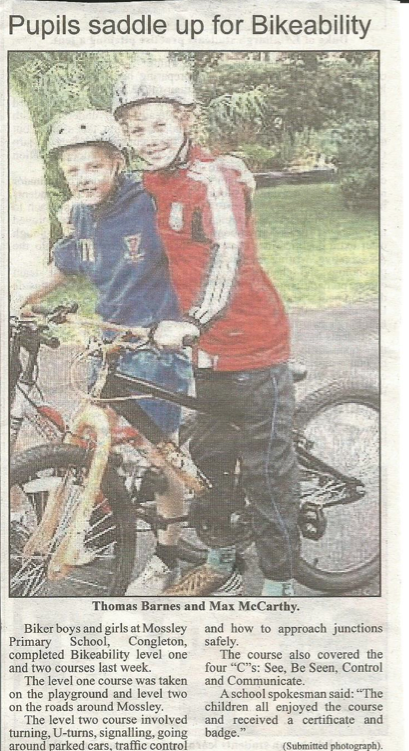 Cyclist Training Ltd back in the press, this time It was Mike Bolton in the Sandbach Chronicle.

Ive not been out for a while on the Velo Tuesday night ride . So tonight I have slowly been going round the house and shed gathering multi tools, gore jackets and inner tubes to shove in the hydro pac, ready for tomorrow nights ride. The Hope R4 are being charged as we speak and which loop to do is all ready forming in my head. The Weather boys and girls are telling us its cold after Tuesday so this may well be the "The last of The Summer Rides"  meaning that from here in we can all do a Nora Batty and get the tights on to keep the cold and wet out. tomorrow is 3/4 for me and hopefully still Gilet weather but I may throw on the Merino for the first time.....IF I can find It. 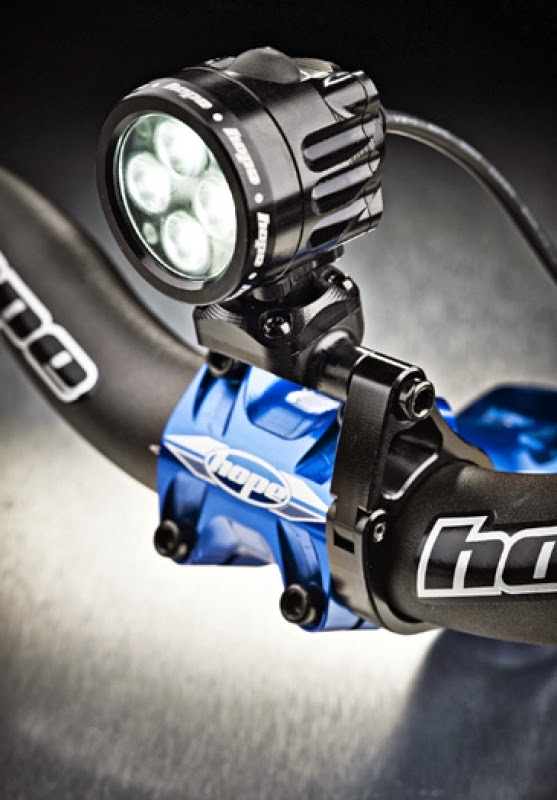 jet black rollers now in stock at the velo store, we had great reviews on these last year, and currently the best price on the web.
Posted by Unknown at 02:23 No comments:

8 o clock at the Velo Store  see us sending Sam on his way to deliver Scooterbility at St Marks Primary in Stoke On trent and Nick was taking bikes for the day 2 session of Bikeability Level 2 at Sandon Primary.

Simon and Tom have three new bikes going out this morning a Turner Burner 650b build, a 2014 Alfine hub  8 speed Genesis (this is actually Sam the instructior New Bike) and an Eddy Mercx EMX with full 105 group set. 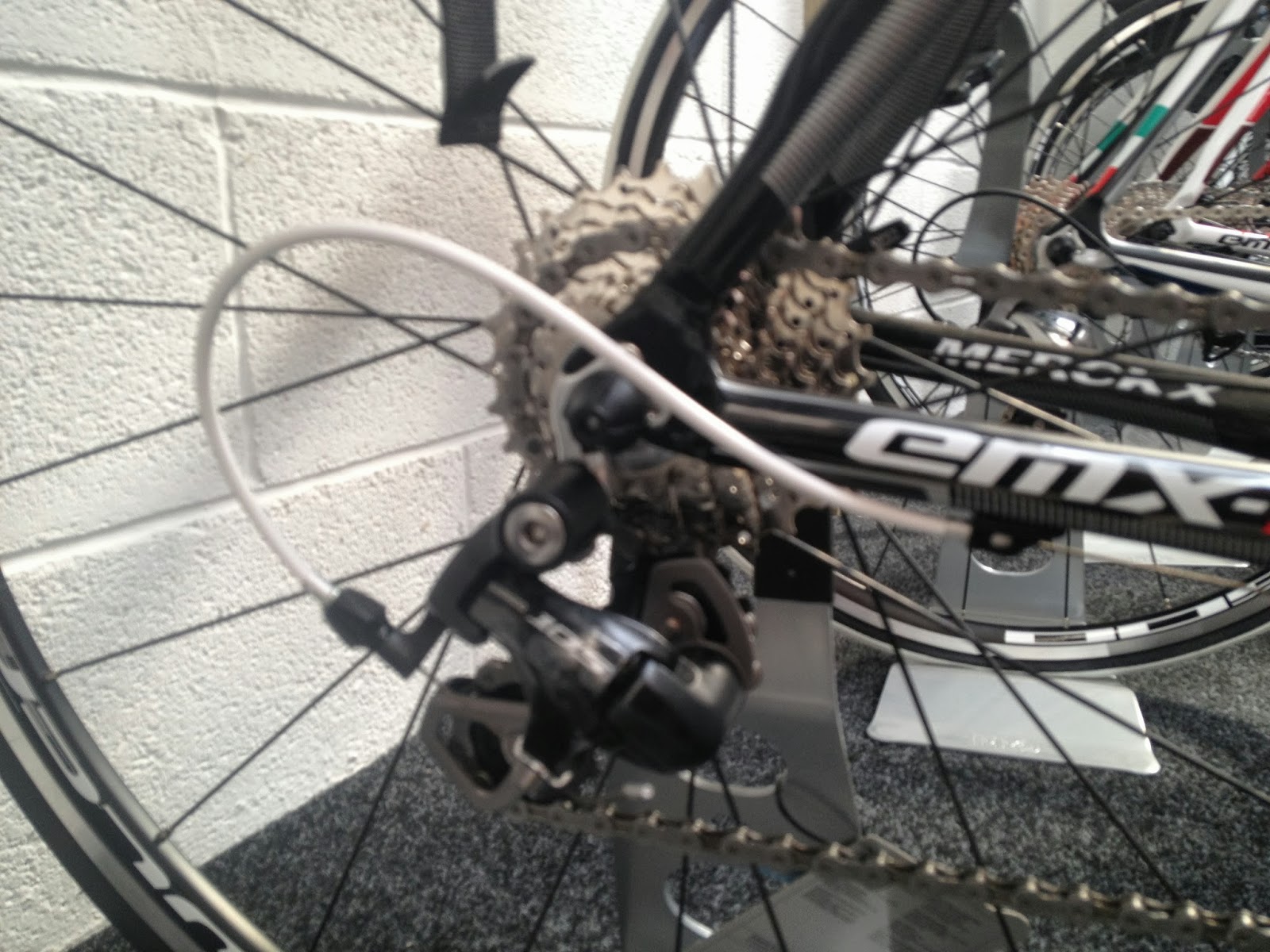 All the invoices and reports are completed for Septembers councils along with Velo qtly Vat submitted (angst).

2 legal papers sent off and homemade soup re-heated, all before siittng down to a progress meeting with Stockport Council at 2.

Well After many years trying to not get involved in the politics of Cycling Ive finally been persuaded (thanks Dave Dansky) to  put in my two penneth and step one was joining TABS (the Association of Bikeability Schemes). I wonder who will regret it first.

2) It is cycle bylaw that Mudgaurds are fitted Or winter bikes are brought back in to service.

Mynes done and Ive also fitted a heavier touring Tyre and started to use the wet lubes on chains. Im pretty lousy at cleaning bikes so this year I sold my old winter bike and bought a Genesis Day one with 8 speed Alfine hub hopefully cutting worry of road salt wrecking rear mechs and 10 speed blocks.

Right Im off to find my gloves and 3/4 tights. 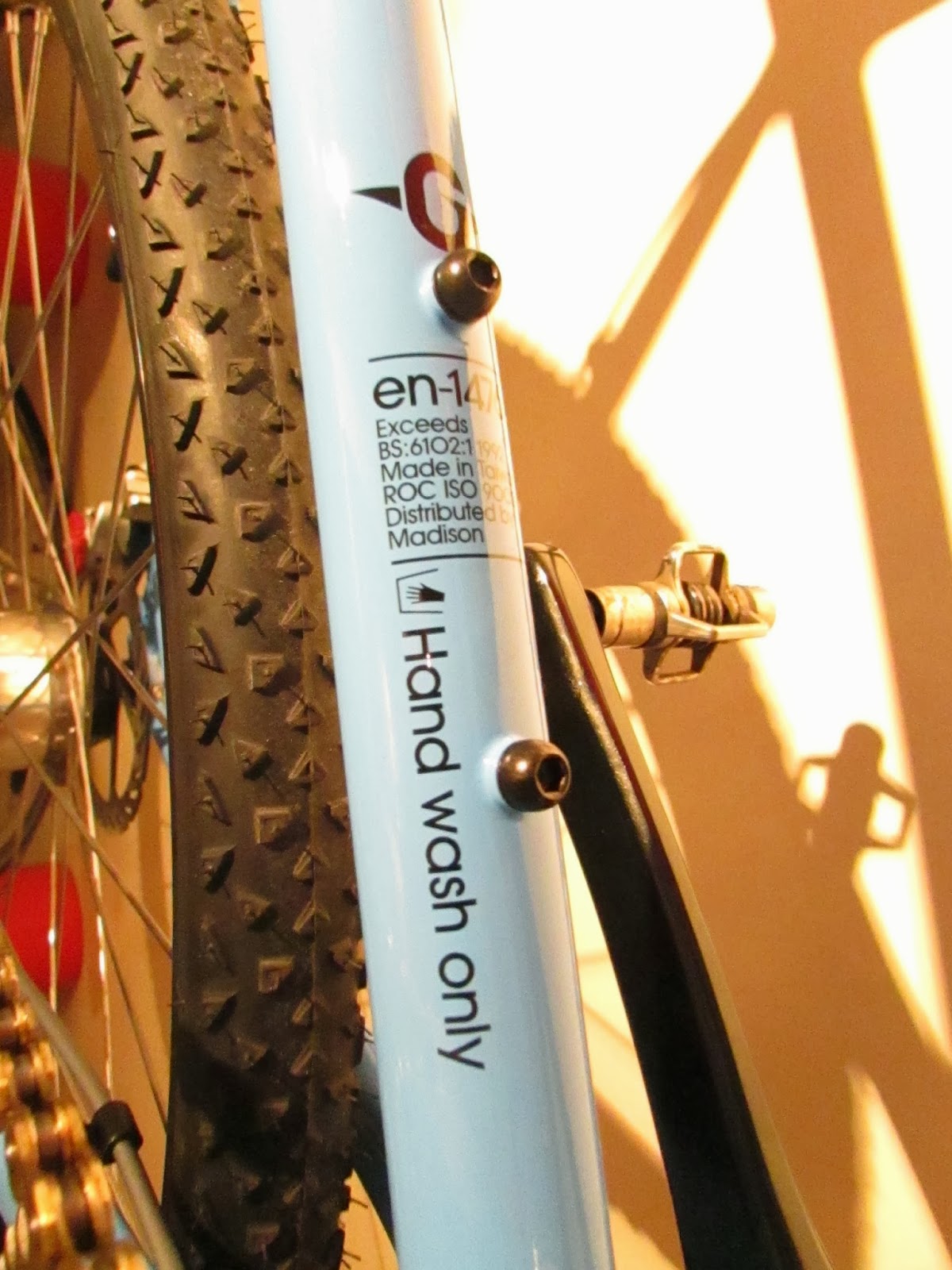